When I had first arrived here it was slightly frightening. We were directed to our dorms, got settled in, then had to go outside for drills from the Marines and their ROTC Cadets. At first we thought that we wouldn’t make it through the week because of how hard it was to endure the drills themselves. SGT. Casillas made my county do half squats and hold it for minutes on end and if you failed to do so, you had to do push-ups in cadence with those squatting. Everyone also learned very quickly to not let their eyes wonder or they would be yelled at and punished and when one person gets punished, the entire team gets punished. But as the week continued, we began to realize why they were so hard on us. It forced us to start to think as a whole rather than individuals and for that, I am grateful. Every time one of us seemed to be giving up, we all knew to try to help and support them to keep going. If someone messed up in the bunks, we instructed them that they need to change what they did and a constructive, friendly manner. 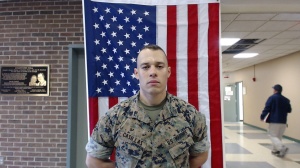 Now, at the end of the week, SGT. Casillas and Kogutek County’s ROTC Cadet became more open to answering personal questions and we bonded even further as a whole and as a family. However, there was still some joking punishment. Last night after evening chow, our Cadet punished us for eating cheesecake. He told us that we were going to stay lean and made us do 5 push-ups while calling out which number we were on. Then he told us to stop counting and to say “cheesecake” instead. All of us were very surprised when we found that we could be laughing and still perform push-ups to our utmost ability. Kogutek will be missed and furthermore, those of Kearsing who shared the bottom floor with me will be extremely missed because we all formed a bond together. We joked together, talked, hung out, and always had each other’s backs when it came to waking up and forming up outside. Thank you to everyone who has been checking our posts on this website. Your support is highly appreciated. And if you have no idea what the Boys’ State program is, look into it and see about signing your sons up the summer after their junior year. It’s a once in a lifetime experience. And for your daughters who feel left out, ask your local American Legion post about Girls’ State. Thank you.