The citizens of Boys’ State are separated into two different political parties, the Nationalists and the Federalists. These parties work together, as political parties do in real politics, to get their candidate elected for certain positions. The first of three State Party Conventions was held on Monday, June 25, and both parties worked to appoint one member to the Party convention rules committee to oversee the election of the Party Chairman, the Party Clerk, and the Party Secretary.

The Party Chairman enforces all adopted rules, calls the house to order, announces all party business, sustains order, explains and decides questions of order with the provision of reversal given to the house, appoints all committees not otherwise provided for, recognizes speakers, submits motions, puts to vote all questions, sets precedence in speaking on questions of order, and decides who votes. 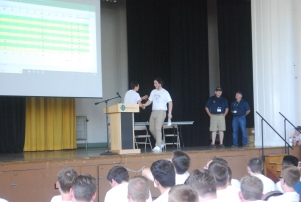 The final assembly ends and it’s time to check out and say good by. Thanks for coming and safe travels.
Moving the County in place for the flag ceremony
Job well done Marines!!!
Pass in review