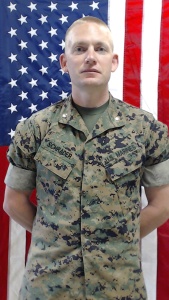 Came into the web development room around 2:25 on June 28th to speak with Max Hagerott (0934) for an interview.

MH: “What is your impression of Boys’ State to this point?”

Major Schrader: “This is my first boys state, and I think it’s a tremendous opportunity for the boys to be exposed to a lot of different things, there’s an opportunity for them to build a comradery and teamwork, and discuss today’s issues, learn about our nation’s history, and our nations future, and how our government works. It’s a very well run program, that I hope my kids will go to. “

MH: “How is it commanding the Marines in charge of the Boys’ Staters?”

Major Schrader: “The Marines that are running the counties are doing such a wonderful job that my job is easy. The Marines are very talented, dependable, engaging, and are concerned about how the boys perform.“

MH: “How is it seeing the young men being molded by the Marines under your command?”

Major Schrader: “Some of the boys are picking up quicker than others, it’ s great to see a gaggle of boys get off a bus what will all experience and see in the final parade.“

MH: “How have the citizens progressed thus far in and what needs to be done for graduation this Friday?”

Major Schrader: “There will be opportunity to tighten up their drill movements and display pride in their unity, and display a memorable parade.“

MH: “Is this your first Boys’ State? Would you come back next year? If so, why?”

Major Schrader: “Yes, yes, the Legionaries that we get to work with, and the Marines are very dedicated and loyal citizens, and the boys potential is huge. So, being a part of the opportunity with the boys on military and it’s role in our nation.”

MH: “What brought you into the USMC?”

Major Schrader: “Well, I have an uncle that’s a retired colonel in the marines, a pilot, and his influence helped me into the Marines, and wanted the challenge and wanted to be the best. And to serve my country.“

MH: “Any tips or recommendations to those looking to become an officer in the service?”

Major Schrader: “Make themselves as competitive as possible, to be on a sports team, be leadership role in the school, become involved in the community, be physically fit, to develop your values and character and continually seek improvement.“

MH: “I ask this question to all the Marines, what was the funniest memory you can share from boot camp? (officer training school)“

Major Schrader: “ROTC at RPI, 6 week bulldog program, I did training during college, and there’s a lot of funny memories, and towards the end there was a lot more laughter, when we knew we were going to make it and become Marines, and earn the eagle globe and anchor.“

MH: “How many years have you served, and where has it brought you around the world?”

MH: “What impact do you hope your Marines have had on the boys here?”

Major Schrader: “Future leaders for our nation to not forget our veterans our active duty personnel when they’re making decisions about things that will impact them, and that they will remember the things the Marines and Legionnaires did for them here.“

MH: “Any last remarks to the parents of the Boys’ Staters or the citizens here if they look back at the interviews conducted here?“

Major Schrader: “The boys are in good hands, and they will return as young men.”

One thought on “Interview with Major Schrader”