The counselors and staff of American Legion Boys’ State don’t often get a lot of feedback about how their efforts impact the attendees.  Dave O’Brien the Program Director does hear from alumni from time to time and I know he appreciates hearing from them. This morning he received an email from Marine Second Lieutenant Brett Jones, who attended Boys’ State as a citizen in 2011 (part of Kogutek County) and returned as an NROTC midshipman to work as a counselor in 2013.  Here is what he had to share with Dave. 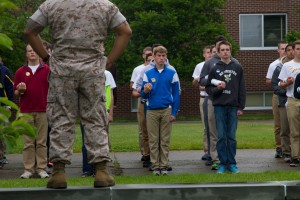 Hopefully this email reaches you and is still an active point of contact. Can’t be sure if you’ll remember me or not, but I once was a young man that attended Boys State in 2011 (Kogutek County under Sgt Josh Decker), who also came back as the only Naval ROTC Midshipman (cadet equivalent for the Navy) to help as a counselor in 2013. I saw that Boys State 2017 has begun and just wanted to share with you a bit of my story in hopes that it might motivate you and your other staff or boys state attendees if you wanted to share it at all.

I owe Boys State of New York my deepest thanks, as it was probably one of the single most influential life experiences I ever had. I was given the privilege to commission as a Second Lieutenant in the United States Marine Corps this past October. I just wrapped up 7 months of basic officer combat skills training last week in Quantico, VA. Tomorrow, I move into my new home in Pensacola, FL where I will begin training as a Pilot for the Marine Corps. I label Boys State as such an incredibly influential experience because without it, everything I just told you would have never happened/would not be happening.

So that is why I’m writing you this evening. I cannot stress enough the importance of what everyone is doing there this week. I saw some Marines think of this program as a waste of their time back when I was a Midshipman counselor, and some staff find themselves not seeing the fruit of their labor and becoming discouraged. I hope to combat that by saying that the work the staff does this week could change the future of the Boys’ lives, and in doing so, the very future of our country.

How seriously the Marines take their responsibility will make a world of difference in what their boys think of them. My Marine was a hardass that yelled at us, tornadoed our rooms, pt’d us hard, called cadence when running, gave us pushups for poor drill, and he never let up until the last day. We (campers) loved him for it, and became friends with each other because we endured it together. His Q&A time with us, limited to strictly professional and Marine Corps topics for the first couple days were eye opening and enlightening.

The guidance and discussion that the counselors facilitated in learning about the political system was also a completely new experience to me. I guarantee most of the boys will be lost all week because they never knew how politics operated from a small to large scale. And what might be even more important is the conversation that counselors can have about their own life experiences with the boys in their downtime, as I previously mentioned.

I’ve said enough, but I do want to leave you with this. Everytime someone asks me, “What made you want to join the Marine Corps?”, my response always begins with “Have you ever heard of the Boys State program sponsored by the American Legion?”. Working there in 2013 and attending in 2011 was an absolute pleasure, and I hope you all enjoy being there and working with the boys as much as I did. I know you will all run a fantastic program, and hope you enjoy it as much as I did.

I hope to hear from you if you get this! Thanks again for all the great work that you and your staff do.

If you attended Boys’ State in the past We’d like to hear how you are doing and how American Legion Boys’ State of New York impacted your life.