Yesterday morning, Jordan Felicia had come in to talk about some key concepts and traits of a Boys Stater from Notre Dame College. Felicia was a Boys Stater in 2016 from Wong County, he talked about not backing down or being intimidated by another candidate for a position. Don’t let a person make you feel less qualified than they are for the job, stand your ground and work hard to reach your goal. Focus on that goal you have and be determined to get there. He told of the differences between a short term, and a long term goal. He gave tips to those running in elections to be their own person, to be unique, to stand out from the rest. This will get you more votes and help your chances of becoming elected. Another concept Felicia spoke about was to always have a backup plan if things don’t go in your favor. Not everything will always work out perfectly for you in life, so be prepared if they don’t and set up a backup. The second speaker of the morning was Nelson Boyd, a 2005 Boys Stater from McKneally County, who graduated from Morrisville. Boyd talked about public speaking being a way to get out of your comfort zone, and that doing so was good for you to develop as a person. A second way to get out of your comfort zone is to be a leader. If you become a leader, people will respect you and it will also help develop you as an individual. For our last speaker of the morning, Executive Director Murphy talked about Dr. Nicholas F. Seulice who was the previous Executive Director of Boys State. He had passed away in 2006 during his time here and was greatly respected by the counselors as well as the Boys’ Staters.

Jordan Felicia giving a speech to the crowd. 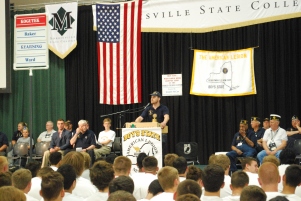 Nelson Boyd giving his insight to the Boys Staters