The citizens of Boys’ State held their final state party elections on June 26th. For a more in-depth guide to the party conventions and the previous days, click here. On this day the Boys’ Staters from each county voted for their party’s nominee for attorney general, and most important of all; Governor.

During the Assembly on Wednesday, June 27, at 9:15 AM, both parties will vote on who will fill these positions, and the other positions from the second State Party Convention. 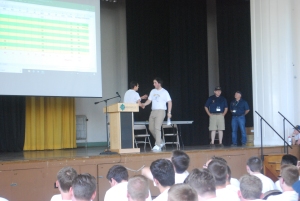